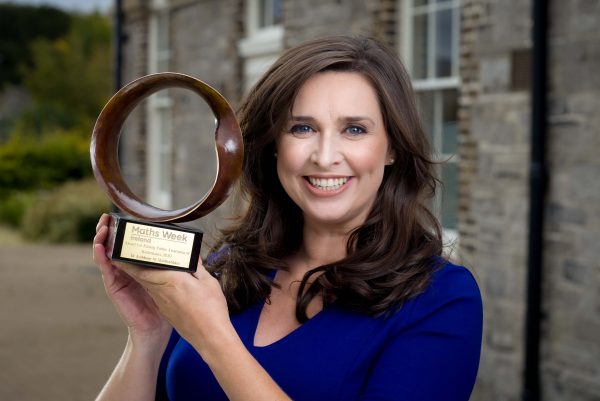 The award is presented once each year during Maths Week Ireland – the all-island festival of Maths and numeracy (10th – 18th October). The event is run with support from the Department of Education and Skills (ROI), Science Foundation Ireland, the Department for the Economy (NI), multinational technology firm Xilinx, ESB, universities, institutes of technology, libraries, schools, training colleges and employers, north and south.

The award was inaugurated in 2016 to honour outstanding work in raising public awareness of mathematics on the island of Ireland. Dr Ní Shúilleabháin, Assistant Professor in the UCD School of Mathematics & Statistics, is a worthy winner of this award as one of the most recognisable face of mathematics in Ireland. She is best known for her work as a science communicator, where she has presented RTE’s flagship science programmes The Science Squad and 10 Things To Know About… and has contributed to national radio, print, online media, festivals and conferences promoting mathematics and science.

Dr Ní Shúilleabháin came to national prominence as Rose of Tralee in 2005, the year of her graduation from UCD with a first-class honours degree in Theoretical Physics, speaking about her time at CERN (one of the world’s largest and most respected centres for scientific research) and shattering the stereotype of someone who enjoys mathematics. Since that time she has proven herself to be a powerful role model, encouraging young people and particularly young women to pursue their interests in mathematics and science.

Dr Ní Shúilleabháin has always been a strong advocate for social inclusion and equality. With her colleague Dr Anthony Cronin, she developed the Maths Sparks programme, a series of problem-solving workshops for students of lower socio-economic backgrounds and led by UCD student volunteers. Research has shown that students from lower socio-economic groups are less likely to study mathematics at higher level than their non-DEIS counterparts and programme has shown to significantly impact students’ learning.

Through her work with the national voluntary organisation WITS (Women in Technology & Science), she has celebrated the work of female Irish scientists and in 2018 co-hosted the Women in Mathematics Day in Ireland honouring Prof. Sheila Tinney, one of the first Irish women to receive a PhD in mathematics. As well as acting as a role model giving school talks across the country, she has been involved in a number of STEM role model projects and is a member of the Gender in STEM group at the Department of Education & Skills. She has participated in the Royal Irish Academy celebration of Hamilton Day for many years and interviewed some of the most prominent mathematicians in the world such as Prof. Cedric Villani and Professor Maria Chudnovsky. Working with Prof. David Spiegelhalter OBE, she co-directed RISK Lab at the Science Gallery highlighting mathematics in the world around us.

For many years, Dr Ní Shúilleabháin has had a strong interest in mathematics education and was an early promoter of Maths Week Ireland as an all-island initiative. As a former post-primary teacher, she has an appreciation of the practical challenges teachers and pupils face and strives to make the teaching and learning of mathematics an enjoyable experience for all. She is particularly passionate about teacher education and directs the STEM initial teacher education programmes in the UCD College of Science. She has published nationally and internationally on her research in mathematics education and plays an active role in a number of national and international networks. She is a member of the STEM Education Policy Review Group of the Department of Education & Skills and in 2018 she won a UCD Research Impact award for her work on Lesson Study with mathematics teachers.

Aoibhinn never thought herself to be a ‘genius’ at mathematics and thinks it is important that everyone see mathematics, like any other subject, as something that can be practiced and improved. She pursued a degree in Theoretical Physics following her interest in astrophysics and continues to encourage young people to follow their interests when considering their options after secondary school. 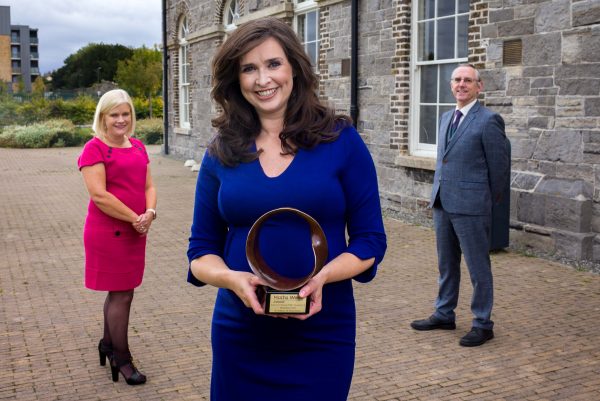 Aoibhinn had this to say on receiving the award:

I am incredibly honoured to receive this award for Raising Public Awareness of Maths in Ireland. I am passionate about making mathematics accessible to everyone and hope that some of my work over the years has encouraged people to pursue their interests and education in mathematics.

While we have a heritage of some amazing mathematicians in Ireland, such as William Rowan Hamilton, mathematics has not always been accessible to everyone in the country and having an exam “for girls only”, with honours maths available to only an elite few, has allowed the subject to have some historical negative connotations.

I believe we should celebrate mathematics in our educational and cultural settings and assure our students that mathematics, like any other subject, can be practiced and improved. In these times where we are bombarded with information and data, mathematical literacy for all members of society plays a hugely important role and I hope to continue to work to improve the mathematics experiences of learners across the country.

“As an all-island festival of maths and numeracy, Maths Week promotes an understanding and appreciation of mathematics in an interesting yet fun way and makes it less intimidating and more accessible to all.

“We’re all aware how maths is vital in helping drive societal change for the better. Its implementation in problem solving, which is critical in countless sectors in society, reinforces its importance in our every-day lives. The purpose of Maths Week is to also highlight the many exciting career opportunities for young people, north and south, in roles related to mathematics and mathematical thinking.

Through her internationally recognised work and research, Aoibhinn Ní Shúilleabháin has made an outstanding contribution to the promotion of maths to the public. She is a very worthy recipient of the Maths Week Ireland award for Raising Public Awareness of Maths.”

The award was individually crafted by Irish silversmith Seamus Gill and is modelled to represent a Mobius Strip, a twisted strip that bizarrely has only one side.

· Prof. Des MacHale, Emeritus Professor of Mathematics, University College Cork. (2016) for his may years of promoting mathematics, in particular his work on publicising the work of George Boole.

· Dr. Mark McCartney, Senior Lecturer in Mathematics, Ulster University (2019) significant contributions in promoting and recording the history of mathematics which has led to a body of important work on mathematicians (and mathematical physicists) in particular with Irish connections.