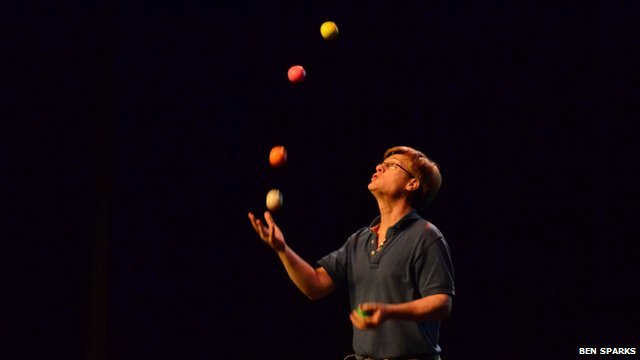 Colin Wright: the Maths of Juggling

Audience: Post Primary schools.
Colin Wright brings his spectacular juggling show to the University of Limerick as part of the Maths Week 2019 festival.

Juggling has fascinated people for centuries. Seemingly oblivious to gravity, the skilled practitioner will keep several objects in the air at one time, and weave complex patterns that seem to defy analysis. In this talk the speaker demonstrates a selection of the patterns and skills of juggling while at the same time developing a simple method of describing and annotating a class of juggling patterns. By using elementary mathematics these patterns can be classified, leading to a simple way to describe those patterns that are known already, and a technique for discovering new ones.

Colin Wright graduated in 1982 from Monash University, Melbourne, Australia, with a B.Sc.(Hons) in Pure Mathematics, and went on to receive his doctorate in 1990 from Cambridge University, England. While at Cambridge he also learned how to fire-breathe, unicycle, juggle and ballroom dance. Since then he has worked as a research mathematician, a computer programmer, and an electronics hardware designer, taking time to give presentations all over the world on “Juggling – Theory and Practice.” Colin also established MathsJam – a major annual gathering of people interested in recreational mathematics. He also enjoys sailing small boats.