Hamilton Day-16 October-  is the centre-piece of Maths Week Ireland. For it was on this day that William Rowan Hamilton made his famous discovery of the Quaternions. The story is renowned to mathematicians and physicists worldwide and remembered in the world’s only mathematical pilgrimage.

With the Covid restrictions we are organising a virtual walk which can be accessed on this page on Friday 16 October at 2pm.

You can join the walk at any time below: 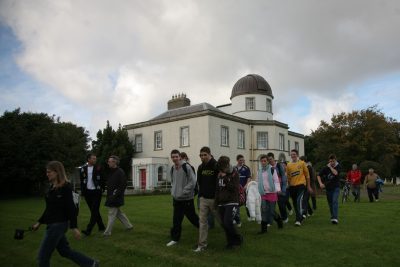 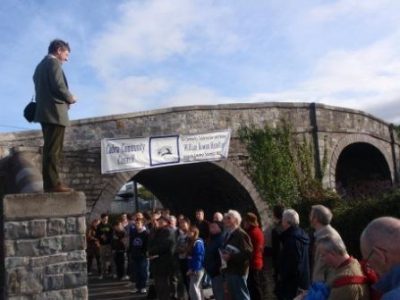 The walk commemorates Hamilton’s famous creation of a strange new number system, called Quaternions, on the banks of the Royal Canal in Dublin on October 16, 1843. Hamilton was walking with his wife Helen from their home at Dunsink to a meeting of the Royal Irish Academy (at that time) in Grafton Street.

The walk retraces Hamilton’s steps from Dunsink Observatory to Broom Bridge in Cabra where he had his Eureka moment. He had ben for many years trying to create an algebra of three dimensional space, but had been unable to do so. His Eureka moment was to see that he could do this, but in four dimensions represented by quaternions. Hamilton performed a piece of mathematical graffiti by scratching his quaternion formulas on a stone in the canal bridge.

Quaternions now play a fundamental role in computer games and animation, special effects in movies, space navigation, physics, engineering and many other areas. The walk was established by Prof Tony O’Farrell of Maynooth University in 1990 and is continued by Dr Fiacre O’Cairbre also of MU.

In an act of mathematical vandalism, Hamilton opened up a whole new mathematical landscape where mathematicians could now feel free to conceive new algebraic number systems that were not shackled by the rules of ordinary numbers in arithmetic. According to Dr O’Cairbre Hamilton freed algebra from arithmetic and was called the Liberator of Algebra.