In this Covid-19 pandemic we celebrate the front-line workers, especially nurses. Florence Nightingale is considered the founder of modern nursing and on her 200th birthday on 12 May she will be widely celebrated. But, her legacy is even greater.  We know the crucial importance of good hygiene and  the importance of proper data in fighting the spread of the virus.  These are the very areas that Nightingale also pioneered and deserves to be remembered for.

Florence Nightingale is regarded as the founder of modern nursing. But, did you know that she was also an important figure in the history of statistics. She was born in Florence in 1820 into a wealthy English family. She was born on 12 May, a day now coincidentally designated as International Women in Mathematics day, and showed great talent in mathematics from an early age.

She was never content to fill the role that society at the time expected of a lady and defied her parents to become a nurse. Florence went to the Crimean War to tend injured soldiers where she found that far more soldiers were dying of disease than wounds. She tried to improve hygiene but found it difficult to persuade those in power.

She gathered data about deaths in hospitals and her statistics showed that poor sanitary conditions were the cause of high mortality rates. Concerned that politicians wouldn’t understand the statistics she developed visual displays similar to the pie chart that is common today. This had a huge impact on the design and operation of hospitals resulting in a significant drop in death rates. This also popularized the use of graphs and charts to convey information and now important policy decisions are informed by statistics. Florence died in London in 1910 having made a huge contribution to health, social reform and statistics.

International Women in Maths Day is on 12 May. This date was selected as it is the birthday of Maryam Mirzakhani an Iranian mathematician who was the first woman to win the Fields Medal (regarded as mathematics equivalent of the Nobel prize).

The image below shows our poster which was distributed to all secondary schools in Ireland, North and South. It was produced by Maths Week Ireland to mark International Year of Statistics 2013. The main image is the traditional view of Florence as the caring maternal figure – “the lady with the lamp”. This image was an acceptable portrayal of a woman to Victorian England but it is the image that obscures her other achievements. The data flowing over her is data that she collected on mortality rates from different hospitals. On the top left appear some of the charts she used to convince the men of power of the importance of changing hygiene practices in hospitals. They convey information in a way that clearly shows trends in the data and were able to quickly convince the reader. On the top right is the modern pie-chart that is now more commonly used to convey such information. 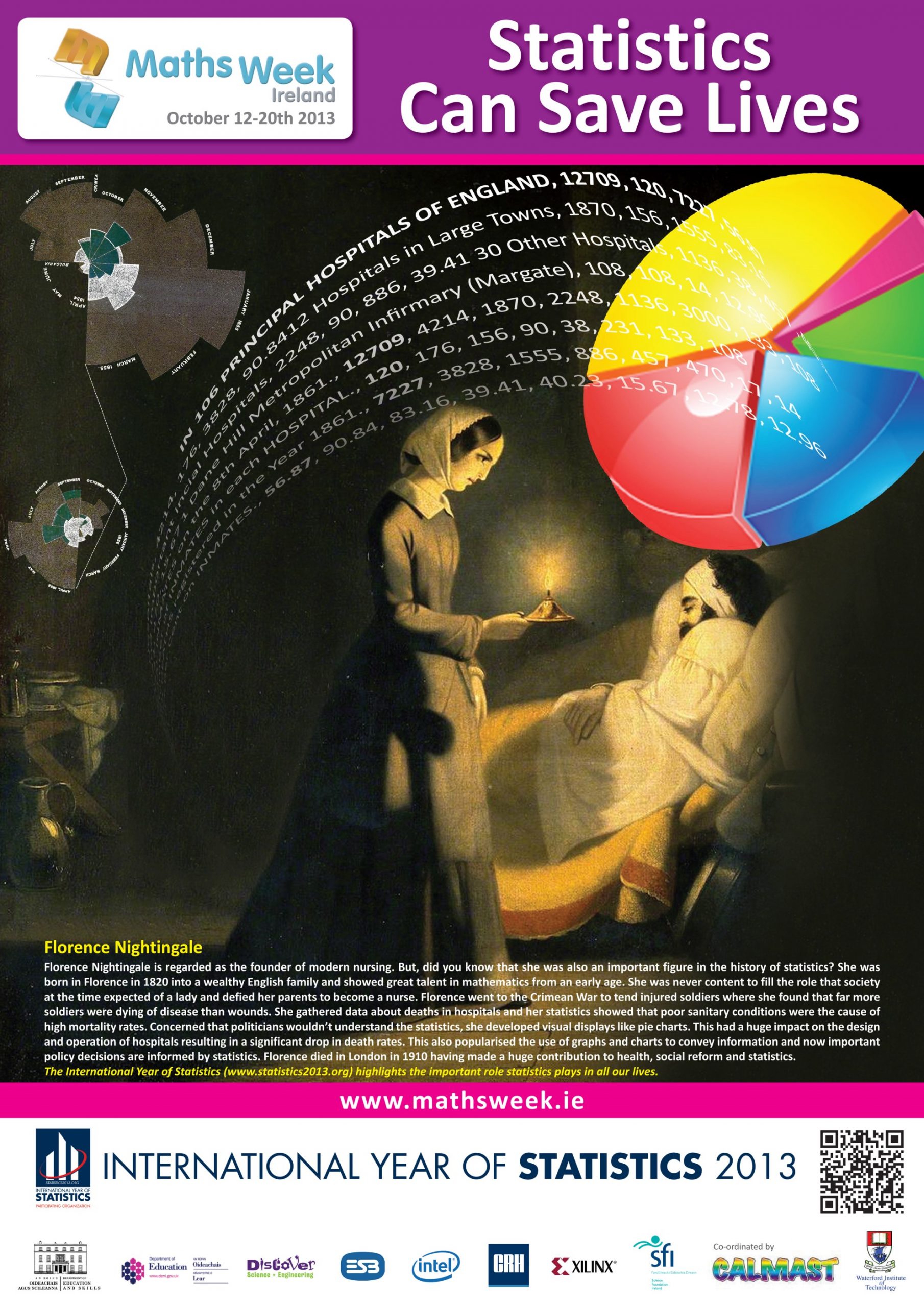